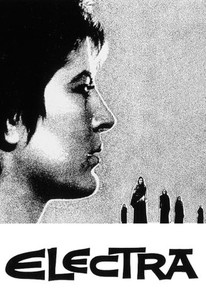 Electra (Irene Papas) and brother Orestes are separated when their mother and her lover kill their father Agamemnon after his victorious return from battle. She marries a poor but honest farmer to escape from her murderous mother's home. Years later, Orestes and Electra are reunited as adults. the two plot the bloody murder of their mother to exact revenge for their father's death. The story is taken from the tragic play by Euripides, with screenplay and direction from Michael Cacoyannis.

Elsie Pittas
as Electra as a girl

Pierre Ampeles
as Orestes as a boy

Mr. Cacoyannis is probably the leading Greek director and so it is a pity that his Electra, although (or perhaps because?) it won several prizes at Cannes, isn't very good.

Well acted by Irene Papas, Cacoyannis' adaptation of the famous Greek tragedy was nominated for the Best Foreign Language Oscar.

There are no featured reviews for Electra at this time.