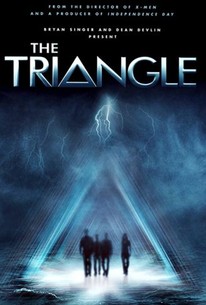 It's The Shining at sea in the made-for-cable paranormal thriller The Triangle. The story opens in the Caribbean, where Stu (Luke Perry), a shady lawyer, has chartered a boat captained by Louis Morgan (Dorian Harewood) for a fishing excursion. Accompanying Stu are his "trophy" girlfriend Julia (Polly Shannon), his best friend Tommy (Dan Cortese), and Capt. Morgan's attractive First Mate (Olivia D'Abo). Swept into the Bermuda Triangle by inclement weather, the five seafarers are greeted with the daunting vision of a huge, deserted ocean liner: the Queen of Scots, which disappeared in 1939. Climbing on board the liner to investigate, Stu and his comrades find themselves at the mercy of an unfriendly spirit: the ghost of a legendary movie star who had gone on a murderous rampage on the night that the Queen of Scots vanished without a trace. Lensed on location in Barbados and Toronto, The Triangle premiered August 12, 2001, on WTBS.

Sonya Williams
as Priestess
View All

Critic Reviews for The Triangle

A lifeless ghost story dressed up in paranormal overkill, TBS' The Triangle can't overcome a leaden screenplay and awkward plotting.

With more work, the script could have finished up as a creepy entry in the ghost ship sub-genre, but as it stands it is less than satisfying

Audience Reviews for The Triangle