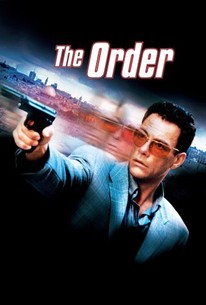 Jean-Claude Van Damme stars as a reformed artifacts smuggler in this adventure-thriller directed by Sheldon Lettich. Rudy (Van Damme) is forced to venture to Jerusalem after his father is taken hostage by a group of religious extremists. In order to free his dad, Rudy must find a ancient scroll that contains secret information about a mysterious and ancient religious sect. Not surprisingly, that same sect doesn't want that particular scroll to be found. Rudy is thus forced to contend with many powerful obstacles as he sets about to procure the artifact and free his dad. Film icon Charlton Heston also appears in a minor role.

Dobrin Dosev
as Jailer
View All

Critic Reviews for The Order

Yes, it's true: Jean-Claude Van Damme is now a screenwriter.

...Van Damme even goes so far as to co-write the script - though I suspect his contribution was limited to the many lame one-liners peppered throughout the film.

Audience Reviews for The Order

More exciting and the best non-stop action scenes of Jean-Claude Van Damme who's on run around at the city of Israel, I like that.

Jean Claude = GAY. and I though he was cool back in the day of Bloodsport