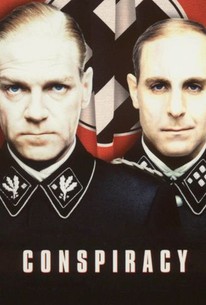 In January of 1942, 15 of Adolf Hitler's right-hand men gathered together for a special meeting in Wannsee, in which over the course of two hours they debated the pros and cons of Hitler's latest directive and the best way to implement it. By the time they left, they had laid the practical groundwork for the "Final Solution," with the execution of every Jewish person in Europe as their goal. A transcript of the meeting has survived, and that document provided the basis for the screenplay for Conspiracy, which dramatizes (in real time) the meeting that led to the greatest crime of the 20th century. Conspiracy stars Kenneth Branagh, Colin Firth, Stanley Tucci, and David Threlfall; the film was produced for the premium cable network HBO, where it first aired on May 19, 2001.

The script of Conspiracy is flat and matter-of-fact, creviced by deep silences as middle management stare into the chasm that has opened at their feet.

The result of a meeting is only as good as the parties present, their aims and their wills. Wannsee was not where the Holocaust's if became when but, rather, where when became how soon.

... Loring Mandel has written a script that's scary in its understatement and Frank Pierson has directed a television movie that's even scarier because it might just as well have been a board meeting of investment bankers...

Conspiracy stands on its own as a fly-on-the-wall glimpse of a disturbing piece of history.

Watching it, I was paralyzed with a sense of shame and disquiet.

A quiet little drama, delivered by naught but quality performers, about the decisions about exactly how to best exterminate an entire race. With both sublime writing and direction, this one will stay with you.

Hitler's right-hand men gather to plan the logistics of the "final solution." A "bottle movie," Conspiracy is a tense and compelling drama. The primary point of the film is made in silence; there are several beats in which a character says something morally objectionable, and the camera cuts to reaction shots of the whole group, who remain silent. It's like the filmmaker is saying, "Isn't it amazing that no one is speaking up now?" The film is Martin Niemöller's "Nobody was left to speak for me" poem in dramatic form. Kenneth Brannagh, Colin Firth, and Stanley Tucci each give strong performances, Brannagh and Tucci exhibiting dogged efficiency and competence. Overall, Conspiracy is a short but haunting exploration of the beginning of the Holocaust.

Shocking. Subtle. Monstrous. Beyond belief. Powerful story. Powerful performances. If you miss this story, something is WRONG with you.