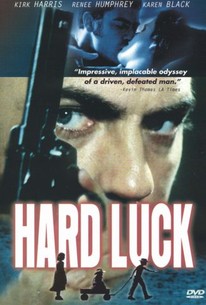 Two old friends have an unusual and unexpected reunion in this offbeat independent drama. "Lucky" O'Donnell (Kirk Harris) is a charming but slightly unstable man who has spent the past seven years in a mental hospital after being convicted of a crime committed while he was trying to help his best friend Eric (Matt Faber). Less than three months before Lucky is scheduled for release, he's visited by Sheryl (Renee Humphrey), Eric's sister, whom Lucky loved when he was younger. Sheryl has bad news for Lucky -- Eric has developed a severe case of cancer, and has only a short time to live. Lucky decides to escape from the hospital and finds Eric; Lucky liberates Eric from the cancer clinic, and they head out to the seaside town where Eric and Lucky spent their summers as children. As Eric and Lucky enjoy their last few weeks together, they persuade Sheryl to tag along, who finds herself torn between her dependable husband Matt (Darrell Bryan) and the reckless Lucky; also stricken with mixed emotions is Eric and Sheryl's father, a police officer, who is ordered to find Lucky and put him behind bars. Hard Luck received the "Maverick Award" (for outstanding low budget film) at the 2001 Method Fest Independent Film Festival.

It's worth overlooking mind-boggling plot developments and occasional narrative murkiness for experiencing Trevor's single-minded determination to fulfill a loving gesture.

As with many Method Fest alumni, the film features fine acting but often falters in the plot department.

There are no featured audience reviews yet. Click the link below to see what others say about Hard Luck!