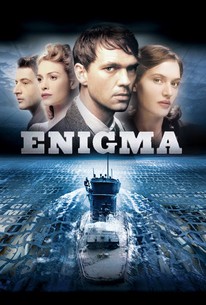 An old-fashioned spy thriller in the vein of 1940s espionage movies and based on an international best-selling novel, Enigma stars Dougray Scott as Tom Jericho, a young mathematics expert who was a central force in the decoding of a Nazi network and has just been released from a sanitarium for an apparent nervous breakdown. He is put back to work in Britain in 1943, where he is called upon to regear their computer system and determine a new German code. If he fails to discover the information, the war's largest convoy of Allied ships heading to Great Britain from the U.S. will be targets for massing Nazi U-boats. Jericho learns of a possible traitor who has tipped off the Germans of the code-cracking, and who may be in the form of Claire (Saffron Burrows), a sexy blonde who has disappeared and who was once his girlfriend. Jericho must now, with the aid of an intuitive clerk (Kate Winslet), calm his infatuation with Claire, who may be his undoing, as well as single-handedly finish his assigned task, which has been said to take an entire team about one year's time. Directed by veteran filmmaker Michael Apted, written by Oscar-winning scribe Tom Stoppard, and co-starring Jeremy Northam, Tom Hollander, and Robert Pugh, this is the first collaboration of high-profile producers Mick Jagger and Lorne Michaels, the former producing under his production company Jagged Films.

A complicated and intelligent British film with a curious roster of off-screen talent.

Not enigmatically at all, it pleases and teases us -- in high style.

It arrives with an impeccable pedigree, mongrel pep, and almost indecipherable plot complications.

Apted and his crew pull out all the stops to craft a thriller out of material that looks better on paper than it does on film.

The combined talents of Apted, Stoppard and the stellar cast make Enigma a puzzle worth solving.

Tom Stoppard's script, inspired by historical events, commands attention with daring, dizzying twists, betrayals and manipulations. An intelligent examination of the dangerous impulse to categorize the unpredictable or unthinkable.

Steeped in the tense atmopshere of Wartime Britain, Michael Apted's semi-Hitchcockian drama centers on the mysteries of code breaking while at the same time relates a noirish tale of love, obsession and betrayal.

Tries to wed a wartime spy thriller with a noir mystery involving a femme fatale, which doesn't fully work.

Within a few weeks' time you'd forget ever having seen it at all . . .

For the great turns from Scott, Winslet and Northam and the timely reminder that the greatest acts of heroism are so often unsung, it deserves your attention.

The story of the breaking of Nazi codes during World War 2 is surely an interesting topic. Sadly, this movie does not entirely live up to that promise. The look isn't exactly cinema standard, it often feels like a British TV movie with its soft-focus flashbacks. Those, while telling an aspect of the story that's important later on, cost the film some pace in the beginning. The overall good cast and the decent last 30 minutes still make for an entertaining movie, but somehow there was more potential in this. It left me a little too indifferent and will probably be forgotten pretty soon.

Thriller about Britain's secret code breakers during World War II. Kate is great in this movie.

Proficient but dull thriller let down by an unengaging lead.