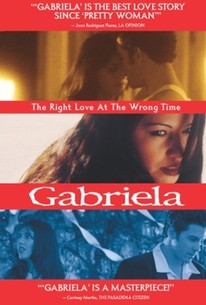 A man thinks he's found the woman of his dreams until he discovers someone else already had the same idea in this romantic comedy-drama with a primarily Hispanic cast. Mike (Jaime P. Gomez) is employed at a psychiatric hospital in California, where he meets Gabriela (Seidy Lopez), a young woman who is also working there while she completes her degree. Mike finds Gabriela to be sweet, charming, intelligent, and very beautiful, but there's a problem -- Gabriela has a fiancé, Pat (Zach Galligan). While Pat and Gabriela's relationship is hardly perfect -- she's very busy with work and school, and he's very devoted to his career -- Gabriela takes it very seriously, and Mike tries to resign himself to the fact that he and Gabriela are never going to be anything more than friends. But as they spend more time together, sparks begin to fly between Mike and Gabriela, forcing her to choose one man over the other. Completed in 2000, Gabriela found a distributor in 2001, when it was picked up by the independent distribution firm Power Point Films.

Lamont Bentley
as Nick
View All

There are no critic reviews yet for Gabriela. Keep checking Rotten Tomatoes for updates!

This movie is not a bad movie at all. The actors delivered a nice performance, but the leads were not so memorable. Another problem with this movie is its inconsistency. It seems like the director couldn't decide whether he was making a love-story or a comedy. Good stuff for and independent film. Pretty neat camera work, clever dialogue at times and some social issues mentioned.