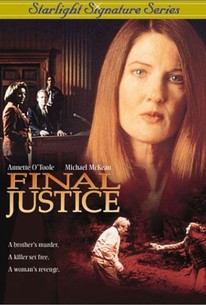 Merle Hammond, (Michael McKean) a sleazy attorney uses corrupt tactics and convinces a jury to acquit his client who is a killer. Gwen, the murdered victim's sister, (Annette O' Toole) knows the real truth and plots revenge against the attorney. Out of desperation, she kidnaps the attorney in an attempt to make him confess to his unscrupulous him confess to his unscrupulous tactics. The cards twist when he escapes and puts her on trial for his kidnapping. COURTROOM DRAMA. 96 Minutes.

There are no critic reviews yet for Final Justice. Keep checking Rotten Tomatoes for updates!

There are no featured reviews for Final Justice at this time.