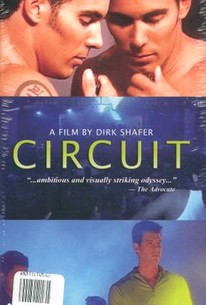 A man hoping to move out of the closet falls into a trap of drug-fueled hedonism in this cautionary drama. John (Jonathan Wade Drahos) is a police officer from a small town who is forced to leave his career behind when it is discovered that he's gay. Hoping to find more tolerant surroundings, John moves to West Hollywood and rents an apartment with Nina (Kiersten Warren), an old friend from his high school days. One night, John attends a party where he meets Hector (Andre Khabazzi), an attractive hustler with whom he quickly strikes up a relationship. Hector is a regular on the L.A. party circuit, and John soon falls in with him, but the endless barrage of music, drugs, and anonymous sex proves more than John can handle, and he soon develops a dangerous dependence on amphetamines. William Katt, Nancy Allen, and Bruce Vilanch also appear in the supporting cast. Circuit had its premiere at the 2001 L.A. Outfest, a festival devoted to gay and lesbian-themed films.

Like most movies about the pitfalls of bad behavior ... Circuit gets drawn into the party.

Like Showgirls and Glitter, the most entertaining moments here are unintentional.

It's too soap opera-ish to carry the heavy weight of the morality play Shafer has fashioned.

The film itself is about something very interesting and odd that would probably work better as a real documentary without the insinuation of mediocre acting or a fairly trite narrative.

Mostly, Shafer and co-writer Gregory Hinton lack a strong-minded viewpoint, or a sense of humor.

What's most memorable about Circuit is that it's shot on digital video, whose tiny camera enables Shafer to navigate spaces both large ... and small ... with considerable aplomb.

Once again, the intelligence of gay audiences has been grossly underestimated, and a meaty plot and well-developed characters have been sacrificed for skin and flash that barely fizzle.

A clichéd and shallow cautionary tale about the hard-partying lives of gay men.

There are no featured audience reviews yet. Click the link below to see what others say about Circuit!