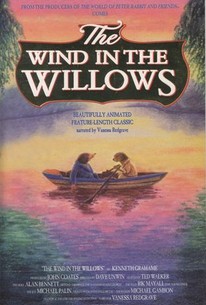 The Wind in the Willows Photos

This beautifully rendered British animated version of Kenneth Grahame's enduring children's classic features the voices of Michael Gambon, Michael Palin, Alan Bennett and Rik Mayall; it is narrated by Vanessa Redgrave who frames the story while reading her children a bedtime story. The story is set beside an ever changing river that "always remains the same," and chronicles the adventures of the timid, unworldly Mole and the pragmatic dreamer Rat, as they embark on Mole's first trip into the great river. There they have many fun and scary times encountering such characters as the menacing Badger and the outrageous, carefree Mr. Toad.

Vanessa Redgrave
as Narrator
View All

Critic Reviews for The Wind in the Willows

The version more likely to please fans of Grahame's book… episodes and dialogue are drawn straight from the source material… the animation… evokes the classic illustrations of Ernest Shepard.

Audience Reviews for The Wind in the Willows

There are no featured audience reviews yet. Click the link below to see what others say about The Wind in the Willows!

The Wind in the Willows Quotes