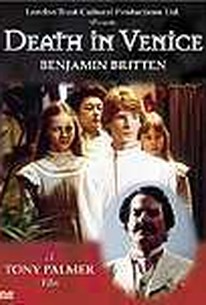 Tony Palmer directs this film version of Benjamin Britten's opera Death in Venice, based on the 1912 novella by Thomas Mann. Robert Gard plays Gustav von Aschenbach, a troubled writer who travels from Munich to Venice. While he struggles with his own personal pain, he becomes obsessed with a handsome youn boy named Tadzio. Music is provided by the English Chamber Orchestra, under the direction of Steuart Bedford. Filmed on-location in Venice, Italy, in 1981. ~ Andrea LeVasseur, Rovi

Critic Reviews for Death in Venice

There are no critic reviews yet for Death in Venice. Keep checking Rotten Tomatoes for updates!

There are no featured reviews for Death in Venice at this time.