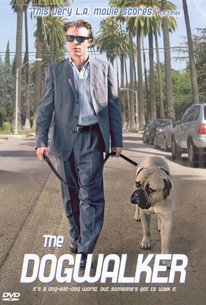 In Paul Duran's witty comedy-drama, down-and-out Jerry (Will Stewart) chances upon an old woman Alma (Carol Gustafson) walking her dog. The lucky encounter leads to a job when Alma's daughter Helen (Stepfanie Kramer) hires him to look after her mother and the dog. Jerry quickly realizes that the job is more complicated than he originally surmised. Alma is foul tempered, and a trio of wizened bridge-play suitors make increasingly bizarre demands on Jerry, while Helen and her vivacious teenaged daughter both make sexual advances on him. Later, when he enlists the help of his African-American friends, an unfortunate clash ensues resulting in tragedy.

Will Foster Stewart
as Jerry Cooper

Gabe Dell
as The Musician
View All

Critic Reviews for The Dogwalker

An indie that benefits from amusing characters, strong thesping and taut situational humor.

It's mighty tedious for the viewer who has to contend with unpleasant characters, hit-and-miss performances and awkwardly staged scenes.

This isn't a retooled genre piece, the tale of a guy and his gun, but an amiably idiosyncratic work.

The Dogwalker starts off strong, but loses steam towards the end.

Trying hard to be cute, The Dogwalker is instead as muddled as can be, tripping up the film as if its ankles were entwined in its own leash.

A pleasingly unpredictable stroll across all of the boundaries that we believe separate us -- and that actually do.

This movie plays like an extended dialogue exercise in Retard 101.

A well-made but emotionally scattered film whose hero gives his heart only to the dog.

There are no featured reviews for The Dogwalker at this time.