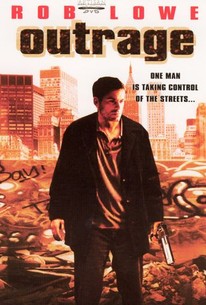 Francis Ford Coppola is one of the executive producers of this revenge-themed telefilm. After insurance agent Tom Casey (Rob Lowe) reports on the suspicious actions of teens near his apartment building, Tom and his pregnant wife Sally (Jennifer Grey) are threatened by the teens in a series of confrontations. The TV movie premiered January 4, 1998 on ABC.

Nathaniel DeVeaux
as The Other Officer

Michael Kopsa
as Officer No.1

If you don't find yourself giggling at the campy seriousness of it all, wait another five; it gets sillier as it goes.

There are no featured reviews for Outrage at this time.