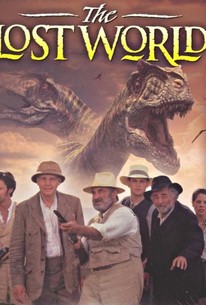 Made for British television, this two-part adaptation of Sir Arthur Conan Doyle's adventure-fantasy novel The Lost World adroitly combines a straightforward retelling with an abundance of slyly satirical grace notes--not to mention deliberate echoes of such earlier films as Jurassic Park, Planet of the Apes and even Apocalypse Now. The basic plotline details the efforts of feuding scientists George Challenger (Bob Hoskins) and Summerlee (James Fox) to prove that dinosaurs still exist on a remote plateau somewhere in the Amazon jungles. They succeed in this endeavor, and also stumble upon a lost tribe of primitive humans, whose hearts and minds are captured by a mad missionary (Peter Falk). Though the film does not flinch in the special-effects department, there is still plenty of time left over for a quaintly old-fashioned romantic triangle involving sportsman Lord Roxton (Tom Ward), the lovely Agnes Mooney (Elaine Cassidy) and dashing Edward Malone (Matthew Rhys). And while there is action aplenty, the film remains scrupulously within the "suitable for children" category. Originally broadcast as the 2001 Christmas offering by BBC1, The Lost World premiered in the US over the A&E cable network on October 6 and 7, 2002.

Michael Bertenshaw
as Reporter at Dock

Julia Walshaw
as Ape
View All

New Zealand looks like Brazil, and the beasts are the best ever on a small screen.

Great Movie for young and old. Its Multi Disk. Will keep you on the edge of your seat. One I would watch over and over.