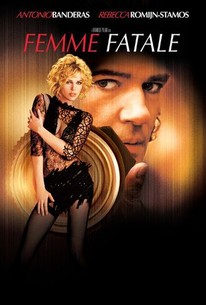 A contemporary film noir about an alluring seductress named Laure Ash. A sultry former jewel thief and con woman trying to live the straight life, Laure is suddenly exposed to the world--and her enemies--by a voyeuristic photographer, Nicholas Bardo, who takes a sudden interest in her. Seen as a dangerous individual dressed in black, Nicholas is always hounding her, attempting to reveal Laure for what she really is--a born manipulator. As Nicholas tries to determine her true intentions, he begins to uncover some dangerous secrets. Her shadowy life of deceit had also spawned vengeful co-conspirators who will neither forget, nor forgive her lies. Laure's shady past comes back to haunt her, and soon thereafter, Nicholas becomes ensnared in her surreal quest for revenge.

Gilles Jacob
as Himself

Stephane Petit
as Bodyguard One

Valérie Maës
as The Blonde at the Restroom, Bridge and Cafe

Joaquina Balaunde
as Woman in Panic

A movie as glossily silly -- and guiltily pleasurable -- as a waiting-room fashion magazine.

I found myself capitulating to its inspired formalist madness -- something I've resisted in [De Palma's] films for the past 30-odd years.

Femme Fatale is not the director's best work ever, but it is as good as we've seen him be in much too long a time.

No normal person should hurt himself trying to follow the thing.

De Palma brings a lifetime's contemplation of cinematic trickery to this, his most abstract and satisfying thriller.

Flies completely off of the rails, morphing from tantalizing trash to nowhere nonsense.

Brian De Palma returns in full style with his best movie since Scarface.

Rebecca Romijn's sexy performance will no doubt mercifully distract some viewers from the silly story, overblown melodrama, and general cheesiness.

Like a great bottle of low-cost wine, it's a sexy, silly, thrilling indulgence to satisfy your cravings.

This script is as oblique as it is pretentious.

It really feels like a lot of Brian De Palmaâ€™s early work, playing around with the Noir genre and fitting it into a modern caper/thriller. The visual style is beautiful, even more than usual due to the fact that itâ€™s filmed in breathtaking areas in Cannes. The story is extremely fun and keeps you guessing along the way. The acting is decent, Rebecca Romijn clearly wasnâ€™t that experienced at the time, but more of her work is visual anyway. Iâ€™m also not a huge fan of Antonio Banderas, but he was actually very good in this. While itâ€™s not a perfect movie, itâ€™s definitely worthwhile and a return to the past for De Palma.

A pretty decent sultry thriller directed by Brian DePalma. A jewel thief tries to cover her past but a chance photo of her alerts the people she has crossed before. Enjoyable if not quite a classic but I do like the ending and Rebecca Romijn suits the role to a T before her success as Mystique in the X-Men series.

I loved it! Rebecca is fantastic, breathtakingly beautiful and a fine actress too. Antonio Bandaras is great, although his comedic lines are too goofy. This is a story about all manner of trickery, typical of DePalma. His story line is as convoluted as ever (Snake Eyes, Body Double), but his fans expect this. In the disk's Special Features, I enjoyed the director's commentary. This delivers the sizzle, if not the substance.