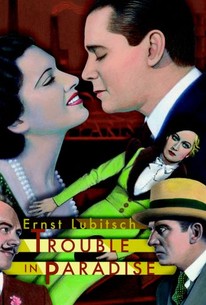 Ernst Lubitsch used Laszlo Aladar's play The Honest Finder as a springboard for one of his most delightful early-'30s Paramount confections. Herbert Marshall and Miriam Hopkins play Gaston and Lily, a pair of Parisian thieves, both disguised as nobility, who decide to rob lovely perfume company executive Mariette Colet (Kay Francis); Gaston gets a job as Mariette's confidential secretary, while Lily installs herself as the woman's typist. Love rears its head, forcing Gaston to choose between marriage to Mariette and a fast getaway with Lily. Filled with marvelous throwaway gags and sophisticated innuendo, Trouble in Paradise was described by one critic as "as close to perfection as anything I have ever seen in the movies." ~ Hal Erickson, Rovi

Charlie Ruggles
as The Major

Larry Steers
as Guest
View All

News & Interviews for Trouble in Paradise

View All Trouble in Paradise News

Critic Reviews for Trouble in Paradise

Filmmakers, screenwriters, actors and audiences can learn every sort of valuable trick from it.

Not a false note in the whole piece. The performances, visuals and screenplay are all exsquisite.

Trouble in Paradise is a triumph of direction and decor which could have been accomplished only by that scowling, heavy-jowled Teuton who is Paramount's chief contribution to the civilized cinema, Ernst Lubitsch.

It's possible to prefer other Ernst Lubitsch films for their more serene stylings and more plangent emotions, but this 1932 production is probably the most perfectly representative of his works.

Despite the Lubitsch artistry, much of which is technically apparent, it's not good cinema in toto.

If ever a film slipped down a treat, this one does.

...a promising setup that's employed to predominantly (and distressingly) underwhelming effect by Lubitsch...

Trouble in Paradise is a pretty bit of frosting, so well-contrived that you barely mind the fact that there is no cake whatsoever under the tasty puff.

The distillate of Lubitsch's cinema of insinuation and evanescence

Lubitsch at the height of his powers as a director of deft, inconsequential and sophisticated comedy.

The lighthearted Depression-era comedy clearly has the famed Lubitsch touch.

What sticks with you long after the movie is over is the terrific, European cosmopolitan humour, and unrelenting sexiness of it all

Audience Reviews for Trouble in Paradise

The first two thirds of the film are impeccable, relying on exceptional performances (especially Herbert Marshall) and a delightfully sophisticated dialogue, so it is really a pity that the plot starts to become a bit implausible and contrived after that, towards the end.

I loved this movie, it was hilarious.

Okay, okay, I was wrong. Frank Capra's It Happened One Night apparently was NOT the first romcom ever ... it appears as if this one, a glittering gem cut in the early 30's by nigh forgotten German wunderkind Ernst Lubitsch, has the honor of begetting a veritable host, a steaming, teeming slew of imitators that extend to even this very week in cinema houses everywhere (beat THAT for florid prose!) But why? Sophistication, wit, and sex wrapped in ... sophistication, wit and sex!

A lovely, simple and clever movie. It was clever because the outcome is never what you expect. Gaston (Herbert Marchall) is a master in diverging a subject and manipulating a conversation. A movie that holds your interest from beginning to end. Although I'm not a fan of this theatrical way of acting, here I didn't mind it at all.