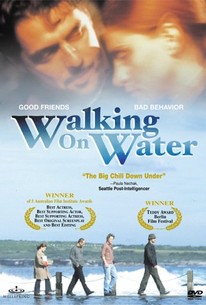 Critic Reviews for Walking on Water

A beautifully written drama that crackles with dark humour.

This is the kind of subject matter that could so easily have been fumbled by a lesser filmmaker, but Ayres makes the right choices at every turn.

Engaging by its economical focus and almost tangible reality, Walking on Water is an absorbing essay about the human condition.

Audience Reviews for Walking on Water

Talk about boring. The film tried to show how realistic and sad things are after the death of a friend, but forgot to make us care about any of the people involved first. The result? We watch a bunch of moping idiots go to gay raves. The end.