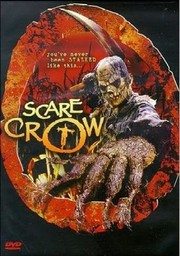 Joel C
½ June 11, 2018
Meh this movie was okay, its not the worst movie ever at all I thought it was a mediocre movie.
The best thing about this movie were the death scenes and yes the acting is pretty terrible the scarecrow killer is a good awesome killer. So as I said this movie was okay not as bad as what people make it out to be 2.5 out of 5 stars.

Bill B
March 27, 2017
This was another film I sorta fell into because the lovely Tiffany Shepis was a part of it, and I was relieved to see that she's at least in the majority of the film. The oddball stuff with this movie is that it's the typical revenge tale, with a bullied guy dying at the hands of his tormentors, then seeking revenge as a wise-cracking scarecrow that can do martial arts for some inexplicable reason?

Robert H
July 13, 2015
A fun little low budget horror flick that never truly realises its potential and yet managed to produce several sequels.
I like the character design of the Scarecrow and there are a couple decent kills in the film but the low budget nature of the film truly shines through with terrible acting, a poorly developed story, and not enough bloody kills to make it worthwhile.
Still I'd recommend this one for all those out there looking for a scarecrow based horror film... I think there are enough to make a subgenre at this point

Lucy S
½ April 15, 2014
I bought this movie when I found it in a discount bin for a dollar. After all, I figured even a bad movie would be worth a buck. I was wrong. In fact, I should be paid for pain and suffering for sitting it. Basically Lester, who looks like one of the oldest high school students ever, is killed by one of his mother's boyfriends. To hide the murder, they place his body under a scarecrow, which displays the level of logic this movie follows. Afterwards, his soul inhabits the scarecrow and he starts a campaign of revenge. However, instead of being shy and awkward, as the scarecrow Lester now attacks using some sort of kung-fu while spouting horrible puns. It's like the twisted love child of Chuck Norris and the Cryptkeeper. One of the silliest moments is when he goes after his neglectful mother, who is able to successful defend herself using a pan of hot bacon grease. Seriously. This film isn't even so bad that it's entertaining. It's just bad.

Wes S
½ July 3, 2013
Z-grade slock that manages to be fun for what it is. Obviously it's going to have a dumb plot, cheesy characters, and typical cliches, but they work for the film in a good way. It manages to be memorable by its own means, and the Scarecrow does look kind of cool.

Jamie F
August 7, 2012
Yes, a crappy movie. However, the fact that the scarecrow wisecracks & throws martial arts kicks, makes it at least amusing in my book.

Josh S
July 8, 2012
A fun gorefest, this film works on many scales, its funny not really scary but has a great ending.Music is a little off & too many kills in 10 minutes but farely descent

David M
½ April 19, 2012
Obviously low budget, has the cheesiest death scenes I've ever seen (one guy gets stabbed in the ear with an ear of corn. Gee, what're the odds of that. :P). Worth one watch, just to get a laugh, especially out of the scarecrow's voice.

Prince B
August 27, 2011
this movie was fucking terrible and not even funny bad either.

Holly F
March 20, 2011
Really? A 2002 film? Thats hilarious!
I was actually enjoying the first half but i got bored pretty quickly when the laughable side had worn off! The Scarecrow is pretty cool but laughable! An obvious low budget film. May 7, 2010

Super Reviewer
Kym (c my community profile) R
November 1, 2010
Well at least the scarecrow?s face was scary looking. Otherwise the movie was kind of Campy in ways. Oh yea & if you like scary bad? movies .. this one?s for you! Lester constantly gets picked on by those around him, & as I always say ?don?t mess with people because you don?t know what you?ll TURN THEM into? Lester becomes the (lamely) wise cracking scarecrow? bad acting & dialog go along with as well F+

Justin W
July 26, 2010
if scarecrow does anything right it's that it makes you happy to see most of the victims get killed....be it a female dog of a teacher, a guy who is overly obnoxious that makes fun of the main character (lester), or many other assorted jerks, you wish for their deaths very early on in the film. however, the main lady in the film, the one who defends lester and is kind to him, is the main focus of the scarecrow's rage late in the film....for no good reason at all, really. overall, the film was kind of entertaining...but nothing special, really.

Love M
July 3, 2010
7/5/10
Really? A 2002 film? Thats hilarious!
I was actually enjoying the first half but i got bored pretty quickly when the laughable side had worn off! The Scarecrow is pretty cool but laughable! An obvious low budget film.

Love M
May 7, 2010
Really? A 2002 film? Thats hilarious!
I was actually enjoying the first half but i got bored pretty quickly when the laughable side had worn off! The Scarecrow is pretty cool but laughable! An obvious low budget film.

Bobby L
November 22, 2009
A badly acted slasher flick with a neat premise and a good soundtrack. Some of the camerawork was pretty good, and the makeup for the titular killer was solid, if nothing amazing. But dear god, the acting was terrible.

Steven S
½ October 21, 2009
OK, first of all, I did not pay for the DVD of this movie. My friend Lucas bought it for me out of impulse when we went to the shops last week. It cost $2. I have no idea why he bought it for me, I never asked for it.

Holy fuck, this movie is pathetic. I never knew movies could be made this badly. The premise: kid gets bullied, kid is killed by his mum's hick boyfriend. Kid comes back to life in the form of a scarecrow and kills the people who made his previous life so miserable. I mean, what went through the mind of the producers when they thought of making this pile of shit? It's saddening that they thought people would WANT to watch it, insulting that they expected entertainment to be derived from it. I really hope the director had no children at the time of this movie's production, because that would mean he took time away from them to shoot this dreadful excuse for a movie. Honestly, 'Scarecrow' makes movies like 'Meet the Spartans' look like art. The acting is on par with that found in an Internet porno. The dialogue is so crude and devoid of any creativity, in fact, I overhear more insightful things on the bus.

An example of the dialogue in this movie, the scene depicted is a young couple making out in the middle of a cornfield at night.

After this crass little exchange of words, the guy is killed by the scarecrow in a typical horror-cliche fashion. I must say that I found this dialogue rather funny, as I doubt the girl would really have rejected his penis.

The scarecrow is a horrible choice for a horror villain. He is far too comical to be taken seriously, and kills his victims in the most unimaginative ways. He even kills a guy using a corn cob! There is no development to the plot. The movie basically consists of a bunch of random scenes put together to produce about 80 minutes of film, complete with a meaningless shot of a chair for about three seconds. The characters are about as charming as rope burn; for those playing at home: that's not very charming at all. I guarantee that anybody who is reading this could produce something better than 'Scarecrow', armed with only a camera phone and a small group of friends; impromptu dialogue would suffice. The film also contains factual errors. At one point, there is a close-up shot of a newspaper, dated 'Monday, August 19, 1986'. First of all, that day was in fact a Tuesday, NOT a Monday. Secondly, we can easily tell by certain parts of the movie that it is not set in the 80's. Apart from that, there is a spelling mistake in the same newspaper: 'procceds' instead of 'proceeds'. WAIT, THAT'S NOT ALL. For no reason in particular, some of the text is printed backwards. Yes, I paused the DVD to discover all of this. The only reason this movie should be screened publicly is to inform film students how NOT to make a movie. What's even more repulsive about this film is that it spawned two sequels!!! Those two DVD's were also bought for me. Yes, I will watch them, but in no hurry whatsoever.

I breathed a massive sigh of relief when the movie was over, but I was so appalled at what I saw during the credits. It made me sick that the idiots who made this film claimed that they were inspired by such legends of the horror genre as Wes Craven (A Nightmare on Elm Street, Scream), John Carpenter (Halloween), Clive Barker (Hellraiser), George Romero (Dawn of the Dead, Night of the Living Dead), Tobe Hooper (The Texas Chain Saw Massacre) and Stephen King (Famous horror novelist - The Shining, Misery, The Green Mile, The Shawshank Redemption). I couldn't believe they even went as far as giving credit to 'The Caterers for Emmanuel's Espressos'. Emmanuel Itier directed this piece of garbage by the way. What more can I say about this worthless excuse for a movie? I wouldn't even class it as 'cheesy', because 'cheesy' movies have to be so bad that they're good. 'Scarecrow' is just bad, despicable in fact.

Captain C
October 15, 2009
Despite a pretty cool monster and nearly unlimited potential, this plane wreck never even gets off the ground. The plot was simply unimaginative and implausible (in a bad way).
Page 1 of 4