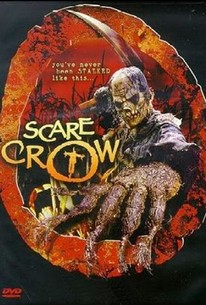 Emanuel Itier writes and directs the low-budget slasher movie Scarecrow, shot on digital video and released straight to DVD. Misfit Lester (Tim Young) is constantly picked on and he ends up getting killed by his mother's boyfriend. His soul inhabits a scarecrow, so he uses his new form to take revenge on the people who picked on him when he was alive. Scarecrow stars Roxanna Bina as Stephanie, Anil de Mello as Greg, and Mark Irvingsen as Farmer Hailey.

There are no critic reviews yet for Scarecrow. Keep checking Rotten Tomatoes for updates!

Well at least the scarecrow?s face was scary looking. Otherwise the movie was kind of Campy in ways. Oh yea & if you like scary bad? movies .. this one?s for you! Lester constantly gets picked on by those around him, & as I always say ?don?t mess with people because you don?t know what you?ll TURN THEM into? Lester becomes the (lamely) wise cracking scarecrow? bad acting & dialog go along with as well F+