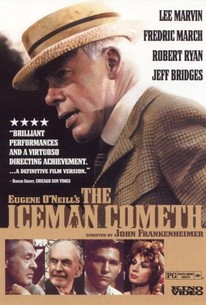 This film, based on Eugene O'Neill's 1947 Broadway play, is set in 1912 at Harry Hope's waterfront saloon. On the occasion of Harry's birthday, several derelicts enter the scene to pontificate on the lives they'd planned, the lives they still dream about, and the wasted lives they wound up with.

Martyn Green
as The Captain/Cecil Lewis

News & Interviews for The Iceman Cometh

View All The Iceman Cometh News

Critic Reviews for The Iceman Cometh

We see a fairly dazzling array of performances, built by Frankenheimer cunningly and steadily.

The play is an inescapably great experience, and that fact isn't muffled by this film.

For four hours we live in these two rooms and discover the secrets of these people, and at the end we have gone deeper, seen more, and will remember more, than with most of the other movies of our life.

A stiff in spite of an interesting cast.

John Frankenheimer's television origins serve him well in his relative restraint in directing the film.

Although this motion picture version cannot sustain the intensity, it is still an important and compelling event.

The scene-stealer is Robert Ryan, one of cinema's forgotten great actors. He delivers a superlative performance as the radical with dark reason and fearful purpose, bringing a new, almost heroic dimension to the character.

A series of powerful performances and some sympathetic direction from Frankenheimer raise this above most of the American Film Theater's productions.

Director John Frankenheimer has done everything right in his handling of the play and has done it without being obvious about it.

Audience Reviews for The Iceman Cometh