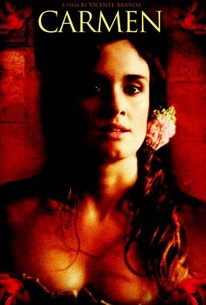 Directed by veteran Spanish helmer Vicente Aranda, Carmen revolves around a complex cast of characters, including Merimee (Jay Benedict), a writer and archeologist whose research in southern Spain circa 1830 brings him into contact with Jose (Leonardo Sbaraglia), a bandit. When Merimee meets the beautiful Carmen (Paz Vega) in a cathedral, Jose bursts in and orders Merimee to leave unless he wanted to be killed. Eventually, Jose reveals how he had met Carmen -- breaking up a fight between her and a co-worker who believed her to be a witch, and subsequently letting her off the hook rather than taking her to prison. When they next met, Carmen was working as a prostitute, which made Jose jealous enough to murder one of her clients. Afterwards, he dedicated his entire life to being with her, not caring who he killed along the way. The film also features Antonio Dechent, Joan Crosas, and Joe Mackay.

There are no critic reviews yet for Carmen. Keep checking Rotten Tomatoes for updates!

There are no featured audience reviews yet. Click the link below to see what others say about Carmen!