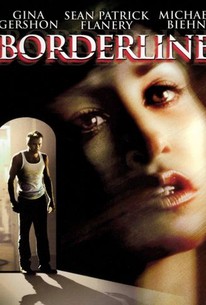 In the direct-to-video thriller Borderline, Gina Gershon stars as Dr. Lila Coletti, a psychiatrist who treats insane criminals in prison. Following a bitter divorce, her wealthy ex-husband Paul (Nick Boraine) gains custody of their two children. Then one day, the ex-husband and his new girlfriend end up brutally raped and murdered. Lila becomes the main suspect in a police investigation led by Macy Kobacek (Michael Biehn), whom she's also romantically involved with. Lila is convinced the murder was committed by Ed Baikman (Sean Patrick Flanery), her obsessive former patient who was recently moved out of prison to a halfway house.

Rory Atkinson
as Freaked Out Inmate

Clayton Englebrecht
as Steve
View All

There are no critic reviews yet for Borderline. Keep checking Rotten Tomatoes for updates!

Not bad, not great. It was entertaining enough, but it wasn't exactly surprising. It was pretty easy to predict.