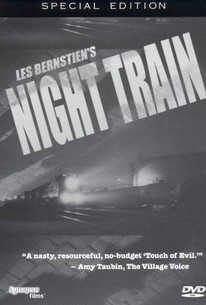 A German expressionism/film-noir hybrid from former special efffects photographer Les Bernstein (Contact (1997) and Fight Club (1999)), this visually driven film follows portly ex-con Joe Butcher (John Voldstad) as embarks on a wild and surreal journey south of the border while trying to solve the mystery of his brother's death. Entangled in a menacing web of corruption surrounding Tijuana's snuff film industry shortly after his arrival in Mexico, Butcher's alcohol enduced stupor finds him encountering a Mexican spitfire and a series of increasingly bizarre, and often threatening characters.

There are no critic reviews yet for Night Train. Keep checking Rotten Tomatoes for updates!

There are no featured audience reviews yet. Click the link below to see what others say about Night Train!