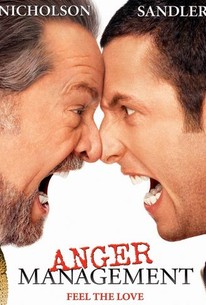 A man comes face to face with the rage he didn't know he had in this comedy. Dave Buznick (Adam Sandler) is an even-tempered businessman who, after a series of strange misunderstandings on an airline flight, finds himself accused of air rage. A judge sentences Dave to undergo anger management therapy, and he soon finds himself in the care of Dr. Buddy Rydell (Jack Nicholson), a celebrated therapist. However, Dave's group therapy sessions with a handful of truly disturbed individuals -- among them jumpy ex-con Chuck (John Turturro), obsessive sports fan Nate (Jonathan Loughran), slow-burning Lou (Luis Guzman), egocentric Andrew (Allen Covert), and bisexual porn stars Gina and Stacy (Krista Allen and January Jones) -- leave him far more unsettled than when he arrived. Later, when Buddy decides to move into Dave's home for intensive therapy, he soon discovers Buddy has more than a bit of his own anger to resolve, and that no one brings out Dave's deeply buried inner rage quite like Buddy. Anger Management also stars Marisa Tomei as Dave's girlfriend, Linda; in addition, the film features a number of notable actors in cameos, including Woody Harrelson, John C. Reilly, Ray Liotta, Heather Graham, and Harry Dean Stanton.

Robert Merrill
as Himself

Bob Sheppard
as Himself

Roger Clemens
as Himself

Rudolph W. Giuliani
as Himself

Cody Arens
as Himself

Bobby Knight
as Himself

John McEnroe
as Himself

Derek Jeter
as Himself

Judith Nathan
as Herself

Ray Liotta
as Himself

Marisa Chandler
as Flight Attendant No. 2

Don Diamont
as Man in Seat

Kevin Dunigan
as Angry Man No. 1

Tony Carbonetti
as Himself

Lorna Scott
as Lady in Restroom

Bonnie Hellman
as Wife at Table

Joe Howard
as Husband at Table

Nicole Segal
as Girl Playing in Water
View All

Anger Management is the kind of film that you could safely catch much later on television. If you have nothing better to watch.

Audiences are still looking at the stars, but nowadays they often do it from the gutter of films like Anger Management.

What is fundamentally wrong with Anger Management is that, try as they might, the two stars have absolutely no comedic or dramatic chemistry together, and so eventually the audience gets slightly bored with them.

Unless you're 15 at heart, you may need anger management yourself after sitting through this aggressively crass comedy, which alternates between mean-spirited slapstick and arbitrary uplift.

No, it doesn't make much sense, and yes, it's irredeemably phallocentric -- but that is, perhaps, its saving grace.

There are moments when the laughs come thick and fast, but just as many where the dream team just aren't connecting at all.

Do we really need a fable about corporate guys getting in touch with their inner brats?

The only thing you can't get angry at are the adorable animal actors.

[It's] like going to the NBA All-Star Game and seeing a fantastic team take the floor, but when the game begins you realize they left their brains in the locker room.

Anger Management does not really deserve an actual review.

You would assume, considering the obvious typecasting of Nicholson and Sandler as two angry guys, that here is a comic gold mine waiting to be plummed. No such luck. While Nicholson and Tomei endeavor mightily to deadlift this carcass they are given nothing really to grab ahold of to work it. And Sandler (however much he has been laughing all the way to the bank and at America's expense) lays another turd.

Anger Management is too boiled up and ultimately doesn't strike a chord. The film has its moments, especially from the addition of Jack Nicholson, but it stumbles from being merely a one-trick-pony of comedy films. 3/5

There's no doubt about it that Nicholson and Sandler have great chemistry and they are probably the best actors for a movie bearing this title. But there's a feeling that they were both put on a leash by the studio writers and restrained from doing so much more that could have bettered the movie. It's also very predictable. But it is funny in a screwball kind of a way.