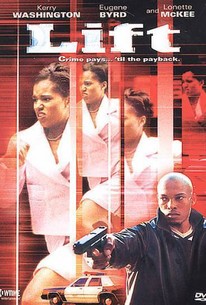 A thief plans one last heist -- though hardly for the typical reasons -- in this offbeat drama. Neicy (Kerry Washington) is a stylish, well-dressed young woman who maintains an air of intelligent arrogance in her part-time job as a window dresser at an upscale Boston department store. Neicy has a secret to looking good on a window dresser's salary -- she's an expert shoplifter, who has learned how to steal the best outfits for herself and her friends, and occasionally makes a few bucks lifting items she can sell to others (though she charges much less than the market will bear). Neicy's boyfriend Angelo (Eugene Byrd) thinks she ought to get out of shoplifting before she's arrested, but since he makes his living selling marijuana, Neicy doesn't have much respect for his opinions in this area. However, when Neicy discovers she's pregnant, she begins to think that a less risky occupation might be in order after all; her boss at the department store thinks enough of her work to suggest a career in design, and is even willing to give her a better paying job in New York. But Neicy has never gotten much affection from her mother (Lonette McKee) and wants to do something to prove her love; when she sees her mother admiring a beautiful and very expensive necklace, Niecy decides to steal it as a gift for her. However, the jewelry store in question has much better security than the shops Neicy is used to, and she's forced to bring an outside accomplice into the picture -- Christian (Todd Williams), a jewel thief whose demands involve more than just money. The second feature from the writing and directing team of DeMane Davis and Khari Streeter, Lift premiered at the 2001 Sundance Film Festival, where it was nominated for the Grand Jury Prize.

Philip A. Braun
as Dent

The stuff about the three generations with the family, and the big drama, and the gang stuff that comes up, none of that worked for me, so I have to give it thumbs down.

Often incoherent and disappointingly lacking in insights beyond the obvious.

[The script] has a muddled and clichéd it's-all-Mom's-fault subplot about Niecy's relationship with her mother, but the scenes of Niecy trying to navigate between her criminal, personal, and family lives present questions that don't have easy answers.

The acting is not bad, but the film is ill-conceived

A wonderfully acted, finely-crafted project that deserves our attention.

Lift is a worthy film that has something to say when it lets the action speak for itself, but when it starts speaking about the action -- the film feels tired.

Washington's performance is bold, as is a surprisingly powerful Barbara Montgomery as Niecy's grandmother.

Decent crime-drama/heist movie...would have been better with a bigger budget.