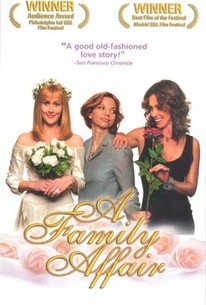 Can a cynical lesbian from the Big Apple find happiness with an upbeat blonde from the West Coast? That's the question in this independent bicoastal comedy. Rachel (Helen Lesnick, who also wrote and directed the film) is a native New Yorker who, after an unpleasant breakup with her girlfriend (Michele Greene), decides she needs a change of scenery. Rachel packs her bags and moves to San Diego, where she has a bit of trouble adapting to the laid-back rhythms of the California lifestyle; she also discovers that getting her career as a freelance writer going again is harder than she expected. After several bad dates, Rachel meets Christine (Erica Shaffer), and Rachel thinks she may have finally found love at last. But after her last relationship, Rachel finds that trusting anyone unconditionally no longer comes naturally. A Family Affair was screened at the 2001 L.A. Outfest, a festival devoted to gay and lesbian-themed films.

Critic Reviews for A Family Affair

Lesnick's sharp eye for humor manages to keep things from getting too preachy.

Without the ready-made drama of coming out and identity struggle, gay romance can feel as flimsy and forced as its straight counterpart.

Suffers from inexperienced filmmaking and a self-absorbed lead character who fails to elicit any truly tangible degree of audience sympathy.

A serious romantic comedy of such strength and substance and so entertaining that it doesn't matter that its minuscule budget shows around the edges.

The pacing never accelerates beyond sluggish, and Lesnick's script is an awkward pile of gag lines.

We get on board because of [Lesnick's] crazy, singular personality, and we're expected to stay in our seats when she grows conventional and boring.

Affair is chock-full of moments where Lesnick breaks the fourth wall and pretty much does a standup routine right into the camera. It's funny once in a while, but gets extremely grating.

Lesnick, who over exaggerates her every facial gesture like a stand-up comic, would have benefited from having a director other than herself.

Audience Reviews for A Family Affair

There are no featured audience reviews yet. Click the link below to see what others say about A Family Affair!