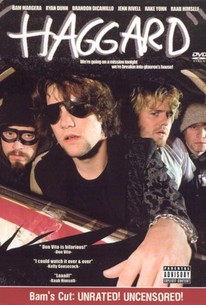 Jackass stars Bam Margera, Ryan Dunn, and Brandon DiCamillo star in this comedy directed and written by Margera. Dunn stars as a young man who begins to suspect that his girlfriend Glauren (Jennifer Rivell) has been having a secret affair with local burnout Hellboy (Rake Yohn). Rather than confront Glauren about the alleged dalliances, Dunn enlists pals Valo (Margera) and Falcone (DiCamillo) to spy on her and find out just what it is she's been up to. Superstar skateboarder Tony Hawk also appears.

Jess Margera
as Drummer in Gnarkill

Brandon Novak
as Dooly
View All

There are no critic reviews yet for Haggard. Keep checking Rotten Tomatoes for updates!

Very bad acting, mediocre writing, and pointless skating scenes, but that aside, thsi is one of the most down-right absolute hillarious films I've ever scene. I was in tears from laughing so hard it's not even funny. The "bike ride" and "gang infiltration" scenes are by far some of the most ridiculous and absurd things I have ever witnessed! This movie is a must see!

This is what happens when self-indulgent retards get their hands on too much money. Although DiCamillo is hilarious.