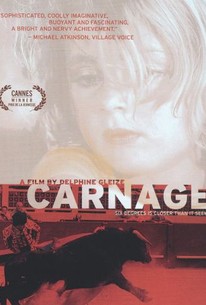 Carnage, an example of what the French call un film chorale, tells several intertwining stories. In the central tale, a young second-generation bullfighter, Victor (Julien Lescarret), is gored, and is rushed to the hospital in critical condition. A little girl, Winnie (Raphaëlle Molinier), sits next to a massive Great Dane and watches the fateful bullfight on television, and becomes obsessed with the bull. A university researcher, Jacques (Jacques Gamblin of Safe Conduct), cheats on his massively pregnant wife, Betty (Lio), who hides a critical fact about her pregnancy from him. Jacques' brother, Luc (Bernard Sens), an amateur taxidermist, lives with their mother, Rosie (Esther Gorintin), who loves him, but withholds a family secret. Winnie's teacher, Jeanne (Lucia Sanchez), struggles to understand her neurotic mother, Alicia (Ángela Molina), when she visits. When her car is dented by a shopping cart, Carlotta (Chiara Mastroianni), a struggling actress, meets Alexis (Clovis Cornillac), a suicidal philosopher/skater who offers to lead her to the culprits. Carnage, the debut feature from writer/director Delphine Gleize, won the Sutherland Trophy at the 2002 London Film Festival and Best Screenplay at the 2002 Stockholm Film Festival. It was also shown at the 2002 Cannes Film Festival and at Lincoln Center in New York as part of their 2003 Rendez-Vouz with French Cinema.

Marilyne Even
as Lucie

Luc Delhumeau
as The Deaf Man
View All

Despite its fleshy title, Gleize's film is a feast for the mind.

Carnage has some narrative messiness. But the beautiful thing here - besides Gleize's fabulous eye - is that not a single one of her solutions for the healing that takes place in her characters' lives is predictable.

Confidently directed and tightly constructed, Carnage announces the presence of a fresh, powerful directorial mind with each frame.

It's very European, and extremely intriguing.

With Carnage, a pungent tale of love and sacrifice, French filmmaker Delphine Gleize has fashioned a modest epic about our ridiculous human comedy.

Delphine Gleize achieves a mastery of the visual, the metaphoric, and the dramatic that few other veteran filmmakers could pull off.

[Director] Gleize has nevertheless written an imaginative and loopy script where the twisting storylines, each with its own distinct tone, eventually connect.

Patience will reward those who don't mind non-linear storytelling, but some of the stories aren't worth the wait.

Feels indulgent, far too long and, yes, very French ... but while it lasts you can't take your eyes off the screen!

Gleize is a smart director with a fresh eye, and she finds inventive ways to underscore her theme, which is that good things and bad things happen to most of us in roughly equal measure but that, somehow, we keep plugging away.

There are no featured audience reviews yet. Click the link below to see what others say about Carnage!