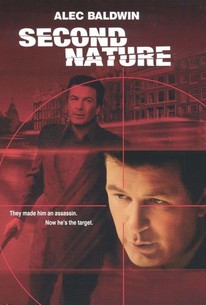 The sole survivor of a plane crash that killed his family, Paul Kane (Alec Baldwin) has trouble piecing together memories of his life before the tragedy. Gradually, he comes to accept the fact that he is a professional assassin, working out of London on behalf of the American government. Much to the displeasure of his superior, Kelton Reed (Powers Boothe), Kane finds that he is unable to perform to the best of his abilities until he can uncover the whole truth about his past life -- and to solve the mystery of the "Chilly Willy" tattoo on his inner lip. Before long, Kane the hunter becomes Kane the hunted, unable to determine his friends or his enemies -- or even if the people around him truly exist. An uncertain blend of The Bourne Identity and A Beautiful Mind, Second Nature was filmed in Europe and released there on video several months before its "official" June 22, 2003, debut over the TNT cable network.

Cosima Shaw
as Joelle
View All

This is better than it needed to be. Bully for Baldwin.

There are no featured reviews for Second Nature at this time.