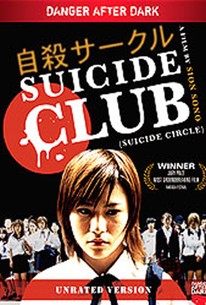 This dark horror film begins with the grisly spectacle of 54 Japanese schoolgirls jumping in unison into the path of an oncoming train. This is only the first in a wave of mass suicides that sweeps across Japan, baffling the police and panicking the populace. The two police officers assigned to the case have to piece together such mystifying clues as a website seems to be predicting each wave of deaths, a coughing child who periodically calls them with enigmatic tips, and a coiled rope stitched out of human flesh. All of it may or may not have to do with a prepubescent all-girl pop group whose latest hit single seems to have hypnotized the nation.

Yoko Kamon
as 'The Bat'

Kimiko Yo
as Kiyomi
View All

It is emotionally satisfying, but logically inscrutable.

...contains an outstanding premise, but mucks it up with inexplicable plot developments and an infuriatingly open-ended conclusion.

The film's an odd blend of mystery, social commentary, experimental freak-out, and all-out horror, and while the blend doesn't always work... it works well enough.

An exceptionally unique movie dying to be rescued from what is essentially a mild case of hubris.

What's great about Japanese horror, is that no matter what the films they will scare you blind. Now with Suicide Club, they take a whole new concept of what we're afraid of the most and they create something that horrifyingly effective. A very original film compared to all the new reimagining's of classic Horror films, Suicide Club is an original scare fest, and it genuinely scares you and there's plenty of great tense moments to be had within the film. A must watch. Suicide Club is a harrowing nightmare of a film, a truly terrific concept for its plot with a decent cast make this a terrific little known gem in Asian Horror. If you love these types of horror flicks, then give this one a shot, Suicide Club is an intense film from start to finish, one that will keep you interested from beginning to end. This is an entertaining film and one that should appeal to fans of this genre of horror. A fine low Budget film, Suicide Club is a film that has an interesting idea for a film, and the directors clearly have an idea what makes an effective horror film by conveying a new type of fear on their audience. This film is disturbing and chilling, and this is one film that will surely appeal to genre fans. Director Sion Sono is a good director and he has crafted a memorable that will be hard to forget long after you've seen it. A film definitely worth your time, one that has a very chilling concept and is hard to forget.

Cult Japanese shocker about a new Suicide trend that has started to sweep across Japan affecting it's youth with the police trying to unravel the causes behind it. After a few years of waiting for a UK release I was a little disappointed having finally got to see it. The main grievance is that there really are no answers and nothing is explained in a conventional way, so it didn't make for very satisfying viewing as at the end I was very confused. A good enough film none-the-less, it has it's memorable moments, mostly from the scenes of suicide which are often bloody (some CGI) and with a very black sense of humour. And the social critique on people who blindly follow the latest trends was also a fun touch. Another viewing of this in the future may go down better with me, still a worthwhile look though.

The mass suicide at the very beginning of the movie is sure to achieve attention of most of the viewers. The movie becomes more thrilling and chilling as it progresses. However, after a point, it turns into a sort of comedy. Also, I didn't like the message/explanation provided therein.

One day in May, 54 Japanese happy and healthy school girls line up along the platform of a Shinjuku subway station and simultaneously throw themselves under a speeding train, in an opening sequence quite unlike any other. Gruesome hardly begins to describe the scene. Thankfully the low budget doesn't allow them to show the carnage in too much detail. A little later in the day, two nurses throw themselves out of a hospital window for no particular reason. The police are mystified - the body count is rising and no particular connection between the victims is apparent... no motive or pattern. But a phone call tips them off to a strange website that counts the suicides... before they happen. This raises the question - are they really suicides at all. Suicide club is part horror movie, part detective mystery, part social criticism, part philosophy and mostly very strange. The film is decidedly confrontational; presenting a complicated structure that opens up lots of questions and rarely lets out any answers. Why would these people commit suicide? The film challenges you to look for the answer inside yourself, rather than handing you some neat solution. The movie perhaps suffers from being too obtuse, but not at least from being too conventional. The movie has been compared with battle royal, which is not entirely unreasonable given the themes and overall shock factor. Suicide club is definitely not in the same class, but then it didn't have a director with the talent and experience of Kinji Fukasaku. Like battle royal, the violence and gore is likely to be the thing that gets the movie the most infamy. Not quite as much on display here, but some seriously OTT blood and guts in places. The acting is probably the place where the quality gap is widest between the two movies - Fukasaku gets fantastic performances from his entire cast, but Sono Sion gets average to downright poor performances from his. Various things like the acting keep suicide club from being great work, but it is definitely an interesting and unique one. Plenty of blood and guts and a little bit of food for the mind as well. The message and meaning here isn't sufficiently deep (or clear) for me to recommend the movie to anybody that would have a hard time getting past the shock moments to appreciate it. For those who like a little carnage with their breakfast, though, this is the latest one to watch, and is somewhat recommended. Keiko’s score 88-100