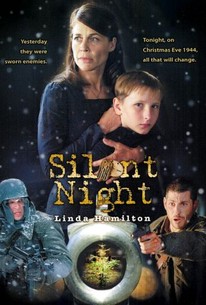 World War II is fought on a small scale in this 2003 drama starring Linda Hamilton of The Terminator. Hamilton plays a single German mother hiding out with her young son in a rural cabin. On Christmas Eve, 1944, three American soldiers show up, seeking refuge from the battlefield. Just as a bond grows, a group of Nazi soldiers arrive, dismayed with the treasonous situation they find. Cassian Bopp and Matthew Harbour also star.

James McGowan
as Dietrich
View All

There are no critic reviews yet for Silent Night. Keep checking Rotten Tomatoes for updates!

A great World War II film based on a true story. Fitting for any time of year really, but especially good for Christmas. Check this film out if you're in the mood for a touching drama.

An interesting story of a Christmas eve during WW II and one night of peace between a few German and American solders. Based on a true story.