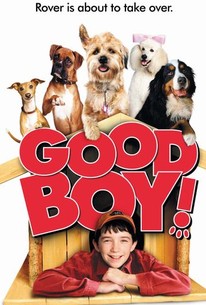 Critics Consensus: Good Boy! should appeal to kids. Adults, however, might consider it a dog.

Critics Consensus: Good Boy! should appeal to kids. Adults, however, might consider it a dog.

Critic Consensus: Good Boy! should appeal to kids. Adults, however, might consider it a dog.

For his debut feature, John Hoffman wrote and directed this effects-heavy family film based on the story Dogs from Outer Space by Zeke Richardson. Produced by Jim Henson Productions, Good Boy! presents the idea that dogs are actually an intelligent alien species sent to earth thousands of years ago to spy on humans in preparation for a full-scale invasion and takeover. But when the spies stop reporting back to the home planet, Canid 3942 (voiced by Matthew Broderick) is sent to earth to investigate. Once there, Canid 3942 encounters Owen Baker (Liam Aiken), a young boy who runs a dog-walking service. Owen befriends the space-dog, renaming him Hubble. When it becomes obvious that the dogs of earth have forgotten their mission, Hubble enlists the help of Owen to get them all into shape before The Great Dane arrives to inspect. If they fail, all of earth's dogs will be recalled to their home planet of Sirius. With Kevin Nealon and Molly Shannon as Owen's parents, Good Boy! also features the voice talents of Brittany Murphy, Carl Reiner, Megan Mullally, and Donald Faison.

Cheech Marin
as The Henchman

Vanessa Redgrave
as The Greater Dane

Paul Vogt
as Bob the Dogcatcher
View All

Not particularly imaginative, but not the worst.

The ensuing wackiness will no doubt please children given to mooning over the family pet; it will lull their parents into a painless, agreeable stupor.

Like a flea-ridden old hound that hasn't learnt any new tricks and insists on slobbering over your shoelaces, it's curiously loveable all the same.

It's ingratiating in that nice doggie way, but the dogs, who have had their lips enhanced via CGI to aid in the illusion of speech, don't have much more on their minds than where the next stick is going to sail in from.

This high-concept melding of E.T., Dr. Doolittle, and Roots is goofy enough to intrigue.

...perfectly suited for the small screen...

Good Boy! is in that mid-range of family films that kids will like and that parents will enjoy rather than endure.

Not great, but not really bad, either.

"Good Boy!" is rather fetching, especially for the small fry.

Could be so much better but it's not, retarded storyline doesn't appeal to anyone

Poor Matthew Broderick. From Ferris Bueller to Inspector Gadget...to a talking space alien dog?!? All I can do is shake my head,,,

I enjoy kids/family films. I enjoy animal films. This film is both of these things, but...I can't say I really enjoyed this one. The acting was poor, the plot was mediocre, the jokes were hackneyed and the message was garbled. Young children may enjoy the sight of talking dogs and their interaction with human beings and one another, but that is all this movie is good for really...a little visual stimulation (and it is hard pressed even there). They employed some great to fair talent to do the voiceovers (The great Carl Reiner, Matthew Broderick all the way to Brittany Murphy), but their performances were kind of boring. The child actor who plays the lead...don't look for him in the future either. Most kids will find this movie quite boring and even most adults will find it bland at best. Do yourself a favor and rent "Spirited Away" and pass on this film.

The prefix that describes this movie is "un". Unoriginal, unimaginative, uncreative, unenjoyable, and just plain bad.