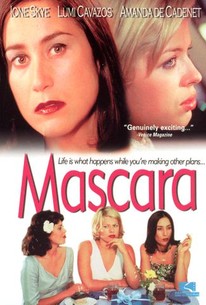 In Linda Kandel's comedy-drama Mascara, three friends find themselves dealing with the not always enjoyable prospect of turning 30 at a time when their lives are already unstable. Rebecca (Ione Skye) has trouble holding a steady job and has gone though a long series of affairs with older men. Her latest boyfriend, Nick (Steve Jones), is a middle-aged photographer who shows a less than wholesome interest in his ripening teenage daughter. Laura (Lumi Cavazos) has just ended a seven-month marriage with Donnie (Steve Schub), who helpfully maxed out all her credit cards before she dumped him. Laura works as a therapist, but she doesn't have much patience with other people's problems at the moment. And Jennifer (Amanda de Cadenet) has separated from her husband after discovering he had a mistress for a short time. Jennifer's response is to throw herself into a series of one-night stands with casual acquaintances and relative strangers -- one of whom she beats when their lovemaking gets too rough for Jennifer's liking. Mascara also features a supporting performance from Karen Black as Rebecca's Aunt Eloise, who has a habit of telling her what she either already knows or doesn't want to hear.

Joyce Driscoll
as Midwife
View All

A rare mature film about free-thinking adults, and one that treats its characters with an open mind and a big heart.

There are no featured reviews for Mascara at this time.