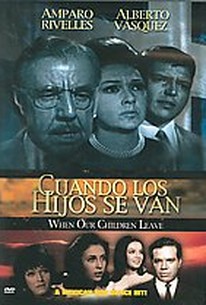 An average working-class family contends with the perils of everyday life in this classic melodrama from Mexico starring Sara Garcia and Joaquin Pardave. Youngest son Raymondo has been accused of purse-snatching, and his father is convinced that swift punishment is the only way of keeping the boy in the straight and narrow. Later, after the rest of the children have fled the nest to find their own way in the world, Jose is hired at the local bank. Being around so much money isn't easy for a boy who has had to struggle his whole life just to get by, and after eventually succumbing to his greed Jose begs his mother to help him out of his pressing dilemma. When the house is mortgaged, the family is forced to accept the very real possibility that they will lose their home. ~ Jason Buchanan, Rovi

There are no critic reviews yet for Cuando Los Hijos Se Van. Keep checking Rotten Tomatoes for updates!

There are no featured reviews for Cuando Los Hijos Se Van at this time.