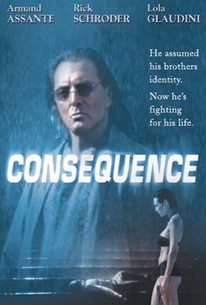 Directed by Anthony Hickox, Consequence centers around a slighted dentist whose surgery mistake costs him his job and dental license. Figuring that hope is lost, he fakes his own death in hopes of collecting the insurance money after assuming the identity of his dead brother. Complications arise, however, when he finds out that his brother was on the lam from several crooked individuals bent on killing him.

There are no critic reviews yet for Consequence. Keep checking Rotten Tomatoes for updates!

There are no featured reviews for Consequence at this time.