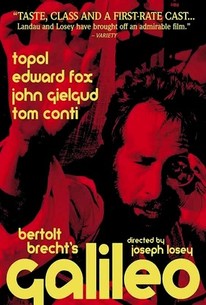 Filmed in England, Galileo is based on Charles Laughton's 1947 adaptation of the play by Bertolt Brecht, which, like this 1975 film, was directed by Joseph Losey. Israeli film-star Topol plays the 17th century Italian astronomer, whose theories run contrary to the edicts of the Catholic Church. Forced to renounce his ideas about planetary movement, Galileo nonetheless holds fast to those beliefs to the end of his days, certain that time will vindicate him. Brecht's trademarked "alienation" technique, wherein the audience is constantly reminded that it is watching a play, is muted by Losey's cerebral direction. Galileo was one of producer Ely Landau's American Film Theatre presentations. ~ Hal Erickson, Rovi

There are no critic reviews yet for Galileo. Keep checking Rotten Tomatoes for updates!

There are no featured audience reviews yet. Click the link below to see what others say about Galileo!