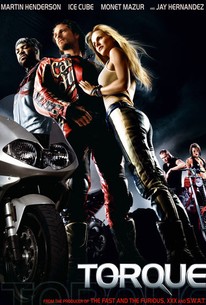 Critics Consensus: Silly and noisy, Torque is stylish fun for the MTV crowd.

Critics Consensus: Silly and noisy, Torque is stylish fun for the MTV crowd.

Critic Consensus: Silly and noisy, Torque is stylish fun for the MTV crowd.

Biker Cary Ford has returned to his hometown to reunite with his girlfriend Shane and take care of a little unfinished business. When he skipped town months ago, Ford was in possession of several motorcycles belonging to Henry, a ruthless drug dealer and leader of the Hellions biker gang. Now Henry's putting the squeeze on Ford in an attempt to retrieve the bikes, which have something a little more valuable than gas in their tanks. When Ford is less than willing to cooperate, Henry frames him for the murder of Junior, younger brother of Trey, the fearsome leader of the Reapers motorcycle gang. With the help of his loyal buddies Dalton and Val, Ford must outrun an FBI agent who's hot on his trail while eluding both the misinformed Trey, hell-bent on revenge, and the callous Henry, who's dead-set on getting back what is rightfully his. Racing across the desert in a perilous attempt to prove his innocence and convince Shane that he's worth a second chance, Ford must outrace his enemies if he wants to clear his name and live to ride another day.

Will Yun Lee
as Val

First Look at the "Speed Racer" Car!
When Robots Attack: "Neuromancer" and "Robosapien" to Hit Screens
Trailer Bulletin: Into the Blue

Shot like a feature-length commercial, Torque is as bright and shiny and inconsequential as a chrome hubcap.

Blessed with a tongue-in-cheek script, plenty of burning-rubber chases, and a sense of its own ridiculousness.

Are we watching a car commercial? An ad for leather jeans? For Viagra?

Thankfully, Torque knows what it wants to be ... and flashes a jocular self-awareness about its genre affiliation.

Produces little in the way of rotation, torsion or anything else that could be roughly diagrammed as excitement.

The good news is Kiwi Martin Henderson manages to escape this trainwreck (literally at one point) of a movie with his reputation intact.

A low grade really bad action flick without a single brain cell in its head...

If you want to see Matrix on bikes, Torque is the stuff. Just as long as you don't want any of that... what do they call it? Acting or something?

Torque is so awful it would have embarrassed Roger Corman forty years ago.

A very loud movie, loud in every way. It's loud with noise of motorbikes, and it's loud with overacting and loud with gravity-defying effects that seem ultimately ridiculous

WHAT THE HELL WAS THIS? this was one retarded movie. trash. this is one of those movies that you would see in a CVS pharmacy 1 dollar dvds basket on the way bottom.

Well, a lot action in a movie can be good, but sometimes if you put it too much, it can be a weaker point too, just like this movie.... The action scene with the motor racing thing was great, knowing that motor is more difficult to be filmed than car... The story just okay, but one thing that I don't like from this movie is the cast... Martin Henderson don't fit for the main character of this movie... He's not cool, not handsome, and more important that he's not winning everybody's heart... But the worst came from Ice Cube... He really really didn't fit to the role he played in this movie... If I have to be honest, maybe he's not destined to be an actor... The other cast just okay, just that two actors that make a big hole to this movie, besides the action scene that too much and the 'amateur' directing style this movie have....

Everyone has a guilty pleasure movie they enjoy. THIS is one of those for me. It's bad. Oh, WOW, is it bad. But that's why I enjoy it so much. Bad cheesy acting, insane action, and hot chicks battling it out ninja-style while riding motorcycles. What's not to love?!?

A cool MTV style movie about biker gangs. A bit like Fast and Furious but on 2 wheels instead. It has a cool, young cast, thumping soundtrack and some good chase scenes. Slightly over do the SFX in some scenes getting way beyond reality but overall an enjoyable action film.