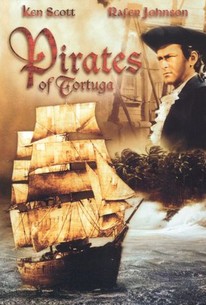 In this high-seas adventure set in the 1600s, a British sea captain must go undercover, join a pirate band, and capture the notorious Captain Henry Morgan. But Morgan is on to the ruse and is well prepared when the sea captain makes his move. As the two engage in mortal combat, they are knocked unconscious and dragged to the governor of Tortuga who prepares to hang them both as pirates. Fortunately, a stowaway aboard the pirate vessel steps forward and reveals the hero's true identity and saves him. Morgan is not so lucky.

Critic Reviews for Pirates of Tortuga

There are no critic reviews yet for Pirates of Tortuga. Keep checking Rotten Tomatoes for updates!

There are no featured reviews for Pirates of Tortuga at this time.