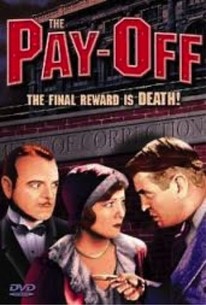 The Pay Off Photos

Exercising his usual creative prerogative, Lowell Sherman was both star and director of RKO's The Pay Off. Sherman plays Gene Fenmore, a jaded gangster boss who falls in love with innocent young Nancy Porter (Marian Nixon). When Nancy's sweetheart Tommy Brown (William Janney) faces execution for a crime he didn't commit, Gene's first impulse is to let the boy fry so that he can have a clear field with the heroine. Ultimately, however, Gene proves he's a decent sort by clearing Tommy and philosophically keeping that date with the electric chair himself. Released in Great Britain as The Losing Game, The Pay-Off was remade in 1938 as Law of the Underworld, with Chester Morris in the old Lowell Sherman role.

Walter McGrail
as Emory
View All

Critic Reviews for The Pay Off

There are no critic reviews yet for The Pay Off. Keep checking Rotten Tomatoes for updates!

Audience Reviews for The Pay Off

There are no featured audience reviews yet. Click the link below to see what others say about The Pay Off!

The Pay Off Quotes