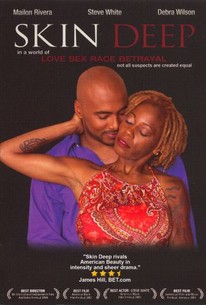 An unthinkable nightmare punctures the facade of a seemingly perfect life in director Sacha Parisot's critically acclaimed thriller Skin Deep, which was an official selection of the 2003 Chicago International Film Festival. Successful Silicon Valley businessman Anthony (Mailon Rivera) seems to have everything as he bides his time between his uninterested wife, Victoria (Kristen Shaw); his increasingly unhinged lover, Alex (Debra Wilson); his resentful best friend, Michael (Steve White); and his demanding job. Tragedy strikes when Michael and his wife, Sarah (A.J. Johnson), arrive for an afternoon of partying and hot tubing and a body appears, leading everyone involved into a paranoia-fueled rage of anger and betrayal.

Thomas Nevarez
as Policeman
View All

A solid calling card for Parisot, Karn and Mantxola.

An intense and funny dark comedy ... it's a fun and exhilarating ride from start to finish.

There are no featured audience reviews yet. Click the link below to see what others say about Skin Deep!