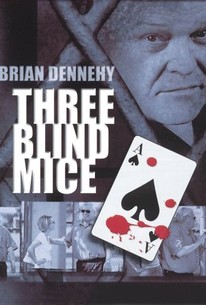 A man with a motive needs to prove he didn't commit a crime in this made-for-television mystery. Matthew Hope (Brian Dennehy), a lawyer and sometime sleuth, is called upon by his friend Stephen Leeds (John Doman) when Leeds is arrested for murder. Three Vietnamese teenagers violently mugged Leeds' wife, Josie (Debrah Farentino), and when they were acquitted of the crime following a trial, Leeds told the court that he would someday see justice done. Now the youths have been killed, and Leeds insists he had no part in the murders. Can Hope clear the name of his friend and identify the true killer? Three Blind Mice was based on the novel of the same name by award-winning crime author Ed McBain.

There are no critic reviews yet for Three Blind Mice. Keep checking Rotten Tomatoes for updates!

There are no featured reviews for Three Blind Mice at this time.