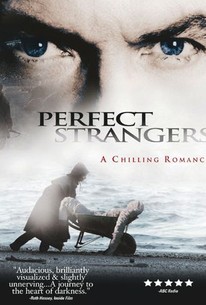 Written, directed, and co-produced by Gaylene Preston, Perfect Strangers centers around the romance between Melanie (Rachael Blake) and the handsome stranger (Sam Neill) who charmed her into joining him at his "castle." The so-called castle is little more than a beat-up shack on a deserted island, however, and it isn't long before her admirer's charm turns into all-out obsession. Clued into the fact that the romantic tryst has degenerated into kidnapping, Melanie makes plans to escape, but the stranger has other ideas. Perfect Strangers was filmed on the remote west coast of New Zealand's South Island and features music by Neil Finn.

Sam Neill
as The Man

It's a movie that fails so miserably in its weirdo aspirations that you'll wish you were watching that bad '80s sitcom of the same name (with Balkie, remember?).

When horror heroines are this lame-brained, my impulse is to start rooting against them.

A cross between Cast Away and Swept Away, carefully flitting between the quality and pretentiousness of them both as it constantly reinvents itself.

Preston's screenplay is ingenious, drawing on British classics like Cul-de-Sac and The Servant to constantly undermine audience expectations.

Even David Lynch would watch this and yell out "what the crap!"

If you're looking for thrills, probing questions, great acting, a meandering, but always engaging, plotline, as well as a unique vision.

this movie gets two stars purely for sam neill looking gorgeous!! This isnt the one with Bruce wilis and Halle Berry, this movie is about a man who is in love with a woman who he knows everything about but she knows nothing about him!! He kidnaps her, shes stabs him and this leads to a whirlwind of weird love that is strange, weird and probably the most stupid storyline in the world!! Its boring predictable, weird and just plain rubbish, however Sam Neill looks so gorgeous!!