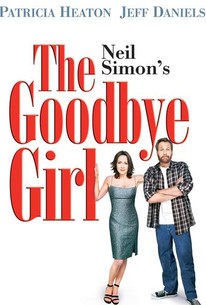 The TNT cable network aired this made-for-TV version of Neil Simon's The Goodbye Girl in January 2004. Jeff Daniels stars as Elliot Garfield, an actor who subleases an apartment in New York City. Unfortunately, the apartment is already occupied by dancer Paula McFadden (Patricia Heaton) and her daughter, Lucy (Hallie Kate Eisenberg). Apparently, Paula's boyfriend decided to secretly sublease his part of the apartment before he left her. Paula and Elliot agree to share the apartment, even though they get on each other's nerves. While she desperately searches for a job and he struggles through a difficult production of +Richard III, they end up falling in love. Eventually their love is tested when Elliot gets a job offer in Seattle. Contemporary pop artists Hootie & the Blowfish contribute to the soundtrack.

Emily Holmes
as Rhonda
View All

Critic Reviews for The Goodbye Girl

There are no critic reviews yet for The Goodbye Girl. Keep checking Rotten Tomatoes for updates!

Audience Reviews for The Goodbye Girl

Nothing different of the original The Goodbye Girl.