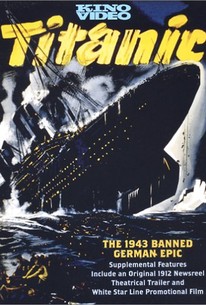 This dramatic recounting of the disastrous maiden voyage of H.M.S. Titanic was produced in Germany during WWII and features an undertow of anti-British propaganda absent from other versions of the story. The building of the luxurious ocean liner Titantic proves to be a hugely expensive proposition, and Sir Bruce Ismay (Ernst Fritz Furbringer), president of White Star Lines, wants to make sure that the ship's first crossing is big news. It is at his urging that Capt. Edward J. Smith (Otto Wernicke) pushes for a record speed in their voyage to New York, sowing the seeds for later disaster. This Titanic features a number of rich, decadent British passengers and a handful noble German peasants. While the film was produced with the participation of the Nazi government, its portrait of a disaster at sea proved to be more depressing than inspiring, and it was pulled from theaters shortly after its initial release, though it has since appeared on television and on home video in Europe. ~ Mark Deming, Rovi

A real curiosity, by now richly comic in a gruesome sort of way.

Surprisingly fact-based at times, complete nonsense at others, yet ultimately inextricable from the evil regime that created it. A fascinating case study in how propaganda bends facts to suit its own agenda.

Neither the first nor the best film telling the story of the doomed ocean liner, the 1943 German version is nonetheless fascinating.

As filmmaking, it's not much to get excited about, but as a curio, it's something else again.

A fascinating glimpse into a chapter of film history seldom perused.

The Nazi propaganda film Titanic is incredibly bizarre yet imminently fascinating. Aside from a few names, the ship, and the iceberg, there's no resemblance to the real people and events. In this version greedy president of the White Star Line, Bruce Ismay, pushes the Titanic's speed in order to set a new world record in hopes of raising the company's stock price and winning a prestigious Blue Ribbon; meanwhile the ship's only German officer, Petersen, attempts to warn passengers and crew that an impending disaster awaits if the ship isn't slowed down before they reach the ice fields that lie ahead. The film is appalling on so many levels, yet it's rather interesting to see how things have been distorted to fit the anti-British narrative. An obscene piece of propaganda, Titanic failed spectacularly (forgotten almost immediately after it was released) and sank into obscurity.