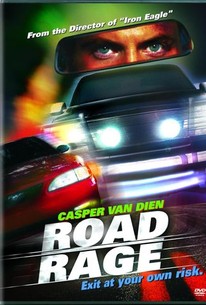 They say you shouldn't take rides from strangers, and a young woman gets an especially vivid reminder of why in this thriller. Sonia (Danielle Brett) is a college student whose relationship with her fiancé has begun falling apart; after an especially ugly argument with her boyfriend, Sonia hitches a ride home with Jim (Casper Van Dien), a truck driver. At first, Sonia thinks of Jim as her knight in shining armor, but before long it becomes obvious that Jim is not the good Samaritan he seems to be, and when he becomes involved in a dangerous game of tag with another motorist, Sonia realizes her situation has gone from unpleasant to potentially deadly. Also shown as A Friday Night Date, Road Rage also stars Chuck Byrn, Joseph Griffin, and Catherine Oxenberg.

There are no critic reviews yet for Road Rage. Keep checking Rotten Tomatoes for updates!

There are no featured reviews for Road Rage at this time.