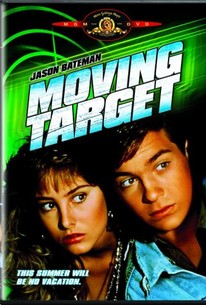 Made for television, Moving Target bears a few faint echoes of the 1986 theatrical feature Out of Bounds. Jason Bateman plays a teenaged musician returning home from summer camp. He is hardly greeted with open arms; as a matter of fact, his family has moved out in his absence. Compounding this traumatic turn of events, Jason becomes the quarry of a syndicate hit man (Jack Wagner)--and of the US Justice Department. It dawns on the boy that he'd better locate his family before anyone else does. Jason Bateman's leading lady in Moving Target is Chynna Phillips, daughter of musicians John and Michelle Phillips, and later the star of the TV biopic Roxanne: The Prize Pulitzer.

There are no critic reviews yet for Moving Target. Keep checking Rotten Tomatoes for updates!

There are no featured audience reviews yet. Click the link below to see what others say about Moving Target!