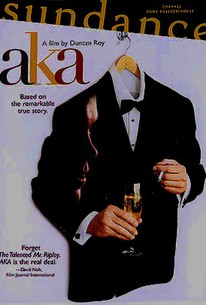 Set in 1978 England, AKA opens with 18-year-old Dean (Matthew Leitch) being kicked out of his working-class home by his abusive father. Shy but socially ambitious, Dean subsequently finds work with high society marm Lady Gryffon (Diana Quick), who introduces him to the privileged set. However, Dean does something to perturb the good lady, and is unceremoniously kicked out of her household. Loathe to part company with the perks of high society, he assumes the identity of Lady Gryffon's son, Alex, and relocates to Paris. There, he makes the acquaintance of Benjamin (Peter Youngblood Hills), a cute but drug-riddled American, and Benjamin's lover David (George Asprey), an older playboy who has the hots for Dean. What unfolds is a tale of deceit, class warfare, and the complexities of sexual identity. AKA was screened at the 2002 Philadelphia Gay and Lesbian International Film Festival. ~ Rebecca Flint Marx, Rovi

Critic Reviews for AKA

As the movie goes on (and on), this triple-image effect ultimately starts to feel less effective than what a single, well-placed camera might convey.

Does the radical choice to split up the action contribute anything that couldn't be achieved in a more traditional format? The answer is a well-earned affirmative, and the drama is solid enough to make the whole enterprise worthwhile.

An interesting though not extremely successful experiment, but it definitely makes you want to see what Duncan Roy does next.

Coupling the plot with the presentation -- and the appealing cinematography -- makes AKA a film not to miss.

It's an eloquent testament to the fragmentary nature of identity.

'AKA' is DOA...boring, and boring in an irritatingly complicated way.

The story is an interesting one, so I wanted to like this. I guess with three movies on the screen, I must have been watching the wrong one.

The triptych scheme underscores the basic blandness of Matthew Leitch as the hero, a cipher on the make.

Roy has told an engaging, complex story with masks under its masks.

Beautifully crafted, daringly staged, and movingly scored, "AKA" is a triumph of British cinema (and cinema in general).

Forget The Talented Mr. Ripley. AKA is the real deal.

Audience Reviews for AKA

Dean, an attractive, 18-year old man living in working-class Thatcher-era Britain, longs to go to college and 'make something' of himself. Trapped in a household with an abusive step-father and a mother who is either unaware or in denial about the situation, events lead to him becoming looked after by a wealthy art-gallery owner - a Lady Gryffoyn no less - and eventually to him assuming the identity of her 18-year old son, Alexander Gryffoyn. He soon gains entrance to the circles of the privileged and becomes well liked when he moves to Paris, eventually becoming entangled in the attentions of a rich bachelor, David, and Benjamin, an American with secrets of his own.

Comparisons with The Talented Mr. Ripley are inevitable and favorable, although aka is much less of a conventional thriller and there's a greater emphasis on sexuality and much richer insight into the protagonist's motivations and psychology. An acquired taste thanks to an extremely low budget (which translates to a gaudy visual style and home-video quality footage), this nevertheless captures its late 70s setting perfectly and is aided by some fantastic performances. Matthew Leitch, Peter Youngblood Hills and Lindsey Coulson as Dean, Benjamin and Dean's mother respectively all give committed and truthful performances. Elsewhere some of the acting borders on caricature, and the music becomes overly invasive on more than one occasion. The section where a scene is split into three frames is also difficult to follow and is a technique that doesn't work (there's an alternate version of the film available on UK DVD which is apparently shown in this three frame format for the duration and is by all accounts unwatchable).

A complex, almost voyeuristic film, based on a true story, aka is definitely worth a watch.