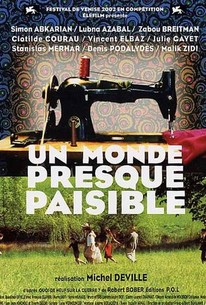 A group of Jewish Holocaust survivors attempt to restart their lives after Europe's liberation from Nazi occupation in director Michel Deville's 2002 ensemble drama Almost Peaceful. Husband and wife couple Albert (Simon Abkaryan) and Lea (Zabou Breitman) attempt to rebuild their tailoring business in central Paris, starting with the hiring of staff for their company. All of their new employees have been scarred -- in varying degrees -- by their experiences during the war. Charles (Denis Podalydes) lost his entire family to the death camps, while Maurice (Stanislas Merhar) seems to be unable to sustain long-term relationships and -- as a result -- frequents whorehouses for companionship. While all of them initially refuse to discuss their experiences during the war, they all also eventually realize that the only way to truly move forward with the rest of their lives is to come to terms with their pasts.

Generosity and love of life are the film's hallmarks. Like the work of an expert tailor, it's done with unobtrusive skill, essential warmth and seamless grace.

Unlike any other film I have seen about the Holocaust.

There's something rather lovely about the mood and intentions of Michel Deville's French movie.

You become aware of how few movies about survivors of the Holocaust show them going about their lives, as opposed to acting out someone's idea of a Holocaust Survivor.

This is a film of half-notes and nuances, and as a chronicle of emotional survival it is infinitely inspiring.

a movie that stuffy film critics rate highly out of a sense of guilt and fear, but which never connect with real audiences, desperately waiting for something to happen

There isn't much of a narrative arc in director Michel Deville's drama, just many touching little stories.

The plotting in this 2002 French drama really isn't any more deep than your typical soap opera.

A loving, moving portrait of Jewish survivors of the Holocaust attempting to pick up the shattered pieces of their lives in Paris.