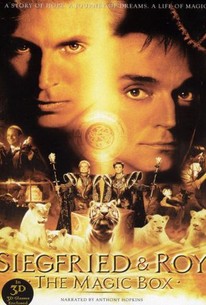 Two men with gleaming white teeth, whips, and a bevy of large cats in cages are at the center of this glitzy 3-D IMAX spectacular. The film opens with two young boys sneaking backstage, hoping to glimpse the secret that is Siegfried and Roy. Instead of discovering how to make a puma spring from a valise, the gold caped duo transports the two trespassers into a storybook fantasyland. There the lads witness Siegfried's difficult upbringing in post-war Germany, Roy's lifelong obsession with animals, and their fortuitous meeting on a cruise ship. The journey ends at their sultan-like estate where they raise and train animals. Siegfried & Roy: The Magic Box features the voice of Anthony Hopkins. The movie's 20 minutes of animated computer graphics, the most extensive so far in an IMAX production, provide an alluring storybook visual setting.

Roy Uwe Ludwig Horn
as Himself

Andrew Dunlap
as Himself

Cameron Alexander
as Himself

A match made in movie heaven, because 3-D is the perfect format to tell the story of this stellar, over-the-top duo.

Movies are not a hospitable medium for magic, at least not the kind of magic practiced in Las Vegas by Siegfried and Roy.

A masterpiece of insanity. ... the greatest unintentional comedy since Glen or Glenda.

It truly feels as though you're plunked down in the best seats the Mirage has to offer.

A lot of fun to watch, as long as you don't pay much attention to the actual content of the film.

Has to be one of the most visually startling films ever to reach screens.

I've never seen their show live, but based on the Imax footage, I'm not impressed.

Viewers will have to fight the urge to flick stardust off their shoulders -- it's that real.

As Vegas as the real thing, a razzle-dazzle entertainment about entertainers.

A brilliant piece, especially with a ticket price somewhere around one-twentyth of the Las Vegas show.

There are no featured reviews for Siegfried & Roy: The Magic Box at this time.