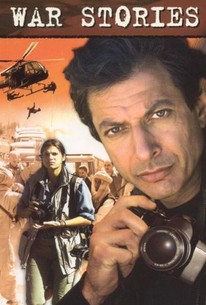 A feature-length pilot film for a proposed NBC series, War Stories is set in a battle-torn Middle Eastern country that is obviously Uzbekistan (but not identified as such). Cynical, hard-as-nails American war correspondent Ben Dansmore (Jeff Goldblum) balks at being assigned a new photographer/partner so soon after the newcomer's predecessor (who happened to be Ben's best friend) was literally blown to bits while covering a hot story. "There's no such thing as truth; that's why they call them stories." That is Ben's philosophy, one that he hopes to impart to idealistic young Nora Stone (Lake Bell). But Nora, whose sister died in the terrorist attacks of September 11, refuses to be as cold and dispassionate as Ben. It takes a series of near-death experiences dodging bullets and fanatical rebels for Ben and Nora to find the common ground so necessary to their future teamwork. War Stories premiered January 29, 2003, on the eve of what seemed certain to be the United States' ultimate showdown with Iraq.

It may not be the best foreign-correspondent/danger-junkie movie ever made, but it does actually manage to raise some nagging questions about our War on Terror that all our network news divisions have been shying away from faster than a speeding Patriot.

There are no featured audience reviews yet. Click the link below to see what others say about War Stories!